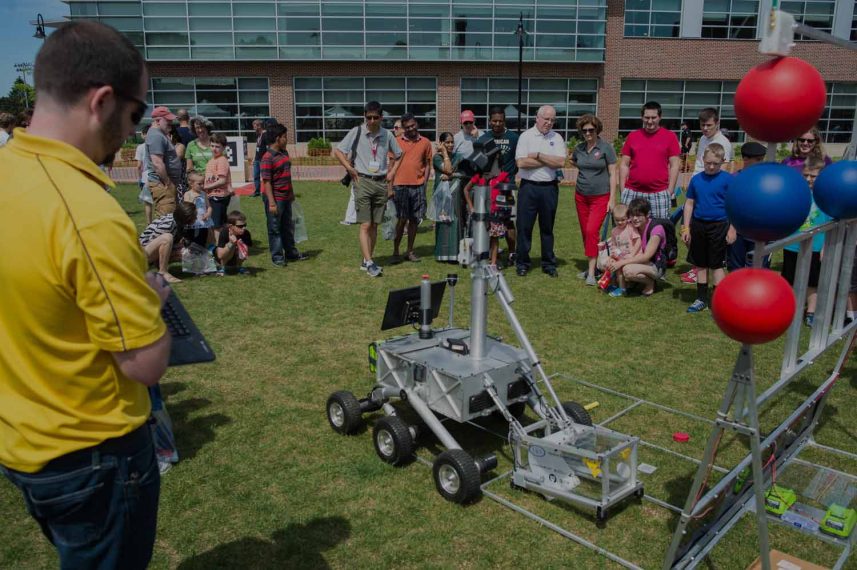 When the ‘Bots Came Marching In… Tech and Humanity Met

NewStoneSoup VT had the privilege of serving as participating judge during the 2013 NASA Centennial Challenge, at Worcester Polytech Institute, Worcester MA:  http://www.nasa.gov/directorates/spacetech/centennial_challenges/index.html.  What a personal and professional rush, and an experience to intimately observe first hand, the intricate nuances of robot design, building, programing and bringing to life a cold technology with “human-like” abilities.  This NASA sponsored challenge is all about offering a sweet incentive (1.5M) for sending an autonomous piece of technology geek wizardry out into a territory and retrieve items.  The terrain is earth, but the scenarios are designed to simulate a MARS mission. Successful contestants will walk away with bragging rights, maybe a big cash in and having solved problems that will make NASA’s mission more successful.  It captures the imagination and focus of its participants.  It elevates mind and soul matters – none of us are the same people who met at the event when we leave.  Something more human than machine happens when those ‘bots come marching in.

For those of us born in the 60’s – space exploration and robot building conjure the “Lost in Space” images of Will Robinson and his B-9 ‘bot caring for his human friend (unforgettable “Danger Will Robinson, DANGER”!), a world where robots take on human feelings and qualities. We are the generation of moon landings, The Jetsons (50’s-60’s), and great human-machine inventions that have changed our lives.  Ever since, we have been fascinated by robots, and WPI took that fascination past an obsession – a plunge into creating the first accredited Robotics Engineering curricula in the US, leading the path and setting hope and a high bar for the upcoming generation of roboticists.  This competition, brings out self coined roboticists of all ages and back grounds with a common passion – taking the “mechanical or virtual agent, usually an electro-mechanical machine that is guided by a computer program or electronic circuitry.” (wikipedia) – and converting it into a prototype worthy of NASA exploration.

As much as I’m tempted to comment on the technical intricacies, quality, trials and tribulations of the ‘bots, or address the frustration associated with computer glitches and algorithms that won’t find their “rhythm” (rhyme or reason…), or the technical specifications that NASA imposes on the makes and models (for Food Network Fans, this is the “Chopped Champions” of Robotics, although the ingredients in the basket are somewhat known…) … I just can’t.  For it wasn’t the mechanical motion that captivated me (ok, so that was pretty darn cool…) to the point of metaphysical introspection – I was swept away by the people behind the machines, their stories, their journey, the teams and the team spirit and the humanity within the geekiness of it all.  The stories range from the WPI staff and volunteers, NASA sponsors (geeks with hearts of gold), the teams, fellow judges, visiting teachers and BRIGHT EYED students.

I could write a dissertation on the teams…  Still today I am giddy with human after glow, having received the profoundly karmatic power of the human spirit.  Trials, challenges, sportsmanship and simple pure CARING for one another as professionals, and people.  I could say, that the competition itself embodies the spirit of what NewStoneSoup stands for: collaboration in times of austerity, and we all walk away with a doggie bag after filling our hearts with the warmth of the meal of camaraderie served:

Lets take team SpacePride from South Carolina – a two person team: a mechanical tinkerer who is fascinated by building things and making them work – he builds beyond machines, he also builds relationships with his southern charm, wit and old fashioned manners. And a Math Teacher who is a self proclaimed math geek (she seriously LOVES math and teaching, just inspiring!). Second time participants, their Robot duo exhibited impressive improvements over last years contender with the undying enthusiasm, southern charm and camaraderie they brought with them last year.  NOTHING rains on their parade, not even mother nature.  They were the “cheerleaders” of the group, always lending a smile, a story, a helping hand – and they can duke out the equations with the best of them.

Team Wunderkamer, the bot that didn’t make it through the door in 2012, with the team leader perpetually focused on his laptop writing his code… Persnickety, laser focused, seemingly lost in his thought and world, with the heart to make sure ALL teams where tended to while executing a hardware store run…  He at the keyboard, his wife running the errands.  Enthralled in precision and smiling for the eager children and teachers that came to visit.  Charming and so classy.

Team Intrepid – a husband-wife team (also second timers that almost didn’t make it), and the first bot to make it back to platform to the cheers of all spectators rooting for this complex and finicky robot.  As it does with Robots, in particular those that are put together in between full time jobs and not financed by huge donors or corporations, these puppies tend to collapse at the most unexpected moment. Yet while the team scrambled to correct technical issues, they still took time to help other teams with their technical challenges.  To watch Intrepid make an attempted retrieval and diligently return to home base, was a spiritual moment for all of us.  This team leaves us with a sense of determination and commitment, positive realism in face of the art of the possible but never losing the faith in their work and looking towards improvement.

University of California Santa Cruz – a group of undergads that started out as an undergad project and wound up scrounging for the 3K registration fee, lodging and daily stipend funds (nope, school didn’t pay for it, but they sure got bragging rights for the stellar execution) who rolled up their sleeves to help others and ripped apart and rebuilt a computer to make sure they met the judging criteria.  They were “broke” young men/students that were thrilled to have earned an “A” for their project and to have the privilege of an audience with NASA.  Just beautiful.  They were exhausted and punchy and geeky and funny and so helpful and caring.

Team Waterloo, our Canadian neighbors, driven by the bragging rights to beat the Americans, sleeping under the stars if needed and willing and able to jump to the rescue of fellow geeks if needed.  So proud to speak with teachers and children and express their passion for technology in ways that even a policy geek like I can understand.  Their robot performed so spectacularly, it took our breath away, but the team is one of iron determination and heart of knowledge generosity.

Team Kuukulgur, from Estonia – traversed the ocean to strut their technological stuff, their seemingly eccentric sense of fashion and their camaraderie.  They strutted through our language and our culture with confidence and desire to contribute to the whole.  They truly embodied “partnership competition”, and we hope their effort pays off for them in their country as well as in the US. They reminded us that humanity does not have a flag.

Team Mystic, another husband wife taking on a “later in life” passion with vision.  They took on to other teams with parental care, sense of family and shared with us, their desire to encourage the spawning of roboticists nationwide.  They brought more than a swarm of bots that children would gladly swipe and take home – they brought hope and courage, family and art.

Team Middleman, husband and wife team – he’s retired from Digital Design, while she still works with challenged humans, taught us all that you are never too old and its never too late to pursue a dream and a vision.  They brought us hope and a sense of humor with their robot (lovingly referred to as our favorite ice cream truck) who achieved more than even they hoped for.  Simply a living lesson in determination and not taking oneself so seriously we cripple ourselves.

The level 1 winner – Team Survey – a TOWERING team of mega minds, eccentric and witty – everything you would think of when you close your eyes and think “geek” (but in huge, outdoorsy bodies), were fierce competitors that never lost their sense of human perspective.  Even through the victory, they were humble and vibrant, “big brother” like, mentoring, helping and caring.  Class act in the face of a victory.

Over and over again, I saw teams helping teams, people helping people.  Teams saving food for other teams, for the teams that camped outside and averaged 3 hours sleep. WPI professors and teams that “DIG” people and technology and do both oh so well.  WPI’s love of teaching is infectious.  We would all hope our teachers care for our children in the manner they do – the same love the have for technology, they put into people.  The NASA carriers of the mighty check book sharing their undivided attention and knowledge for all, while reminding us they are still husbands/wives, parents, neighbors and people.  They just aren’t NASA.  They are the soul of NASA.  Fellow Judges from IRobot, WPI Alumn, JPL and Honeybee Corp – dead serious about the competition and the rules and oh so caring about the human story and nature behind the bot – it was a true homage to professionalism and having fun at the job when hours were long, and they, the out of towners, bunked in dorms!

Technology does not take away our humanity.  We give up our humanity when we forget to care about people, the environment and all things living.  Technology, can bring us closer to our inner creator and enables us to unleash the power of our imagination and make the impossible, possible. It can help us reach out to loved ones far away.  Or inspire a stranger in need. For all the intimidation it can create, technology will NEVER replace the human spirit, the soul, the humanity.  The human IS part of the loop and the equation.  We just must take the obligation of not losing that perspective, not only seriously but responsibly.  We can not survive without each other.  The “Terminator” is not here. Human spirit is.  Next time you are tempted to keep your nose in your Iphone, don’t forget to take the time and smell the roses, look up and acknowledge the life forms around you.  It is possible to let the bots in along with a dose of heart and soul.  I learned that from a group of geeks…