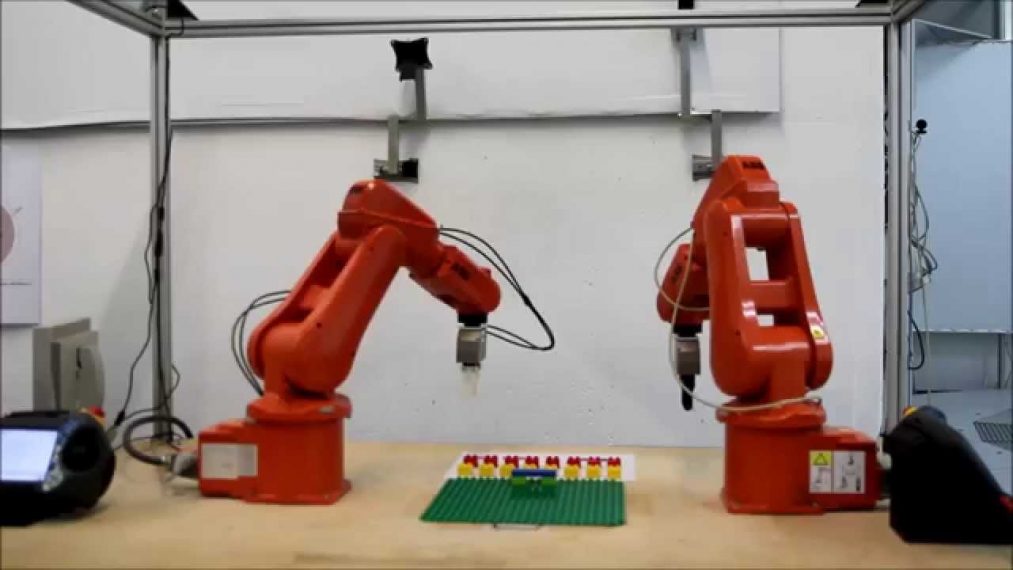 As humans and machines work side-by-side, safety is redefined in the factory.

Behind the doors of a regular factory making regular things, human workers unload parts into the hands of robots. There are no gates, no light curtains to protect man from machine, just robots working side-by-side with humans.

The robots take those parts and combine them midair, their mechanical arms twisting just so with the precision only machines know, before handing the parts off to other robots, which link other pieces as they fly across the factory floor. And so on down the line.

These synchronized collaborative robots perform a mechanical dance of sorts on the factory floor.  They take the concept of the traditional conveyor belt and twist it into something even more automated, something futuristic.

“The robots were flowing the parts down the line,” recalled George Schuster, functional safety expert for Rockwell Automation. “It was a jaw-dropper for me.”
And Rockwell Automation built that robotic masterpiece, an idea borne by a customer seeking a large robotic system.

This large-scale automation not only is possible, but probable as robots and humans work ever closer together.

Collaborative robots are changing the game in industry, creating new opportunities as the walls dividing man and machine are dismantled.
But as those barricades disappear, the protections need to become more nuanced.

Safety becomes a pre-engineered solution rather than a physical barrier. Safety without BordersRoberta Nelson Shea, global marketing manager of safety components for Rockwell Automation, identifies four characteristics that – in whole or in part – define a robot that can be used in a collaborative application. That is, as a machine that can work alongside a human without traditional safeguards.

Safety-rated monitored stop: The robot is able through its safety system to perform a protective stop that is safety-rated and monitored. This enables human workers to hand parts directly to the end effector – the device at the end of a robotic arm, essentially the hand of the robot.

This feature, in various forms, has been used in industrial applications for more than 10 years, and was present in the hundreds of robots installed by ABB Inc. in the mid-2000s at an automotive assembly plant. Whereas those robots were managed by external means, today’s robots now use internal monitoring by the robot safety control system.

Hand-guiding operation: This feature allows operators to manually control and enable robot movement while it is in automatic mode. The robot’s speed is reduced and it can make safety-rated monitored stops, allowing an operator to move a robot to another position or location.
“This puts operators in direct contact with a robot system,” Nelson Shea said.  “However, this emerging technology has not seen wide adoption as there remain challenges for both manufacturing and safety engineering teams.”

Speed and separation monitoring: Using sensors, a robot maintains the needed distance from an operator, meaning it reduces its speed and comes to a protective stop (safety-rated monitored stop) before the robot system can make contact with the operator.
The next iteration of this ability will be to develop a safeguarding device that’s integrated with the safe motion control, which would redirect the robot system away from intruders, Nelson Shea said.

“It’s defensive. The robot tries to keep away,” she said. “Think of it as this: A person dancing with a robot. You take a step forward. It goes back. You take a step back, it comes forward. You do a rapid approach, it does a quick slow down to a protective stop.”
This capability doesn’t yet exist, but seems to be the inevitable next stop, according to Nelson Shea.

Power and force limiting: The robot is limited in speed and force so that incidental contact – either by the robot, the end effector or the part – will not harm the person.

This attribute, while seemingly the seminal concern when it comes to collaborative robots, also is the most challenging.

But figuring out how to ensure someone doesn’t experience any pain involved studying a lot of factors, including age and health condition.

And this becomes even more complicated when you consider all of the different applications a robot might have throughout the factory, making the need for safety professionals and production workers to communicate paramount.